After paying off our mortgage in 2016, the Building Task Force was formed to explore the next step in the Master Building Plan that began in 1997.  After exploring the needs of our church and ministry through needs assessments, surveys, and interviews, several minor projects were identified, as well as three major projects as our next step in the plan: a chapel, banquet hall, and kitchen. The minor projects were sent to the trustees, to be further developed, and a new committee was formed, the Building Research Group.  This group began to develop these major projects and have spent the last year working with the elders and leadership on this task.

This addition to the website was created to keep the congregation informed of the progress of the campus evolution, both in the area of home improvements, minor projects that are upcoming, as well as continued development of the Master Plan through these major projects.  We hope that you will appreciate how far we have come both as a church, by watching the video, and as a campus, by reviewing the timeline, as well as join us in watching our campus and ministry continue to grow in our future projects.

Watch the story of how we got to where we are now and flip through the timeline to see what all we have accomplished through the years.

0+
Years as a Congregation

First Friends began with 10 adults & children meeting at the YMCA, then purchasing our 31st Street location for $750

Meeting for 3 worship services, the need for larger space identified

Mortgage paid off  at 31st Street location, looking to relocate

Committee formed to determine Master Building Plan, to be built in phases

1 Million given toward building project

Below is a list of projects we are currently working towards completing.

We are building an outdoor playground next to our pavilion this spring! This will provide fun for families from Sports Ministry, as well as our church. 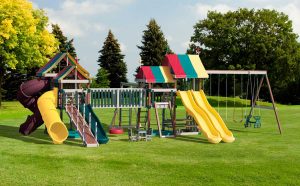 Illustrative purposes only. Not an exact representation.

Below is a list of projects our Building Comittee is brainstorming, researching, and praying about. Take a look at what might be coming our way soon!